The Racial Ethnic Dialog Group consists of four women  and seeks to honor the gifts of all people while finding ways to dialogue and work together as an inclusive caring community.

We are united as the body of Christ, from different cultures and traditions have come together as a Racial Ethnic representatives of our sisters in the Synod.  Each of us, Native American, African American, Hispanic, and Asian American bring different gifts  and experiences to empower our sisters and encourage them to join us and work for the Kingdom of God, here on earth.

In 2012, the Session of New Covenant Fellowship of Austin, a racially diverse Presbyterian congregation in Austin, Texas, voted to establish a Women’s Ministry.  Jane Mack, an elder from Covenant Presbyterian Church and current member of NCFA, was called by the congregation to be an elder of NCFA and to start a Presbyterian Women at NCFA.

Under Jane’s leadership, this new Presbyterian Women’s group was able to accomplish a great deal in one year.  Jane, with cooperation from her pastor, the Rev. James Lee, held two brunches with the women of the church.  The brunches proved to give the women opportunities to get better acquainted with each other.

Throughout the year, the women attended several events.  In the spirit of New Covenant Fellowship, this new PW established relationships with the PW from Covenant and Genesis Presbyterian Churches.  In partnership with the PW from Covenant, the PW from NCFA sent three women to the PW Gathering in Florida.  They were Elder Danita Nelson, Deacon Patricia Caroom, and charter member Roxann Vallejo.  It proved to be a promising time for all three women.  Danita is now a junior at Austin Presbyterian Seminary.  Patricia Caroom is a missionary to Sudan, and Roxann is now leading a Horizon Bible study on 4th Wednesday evenings at the church.

The African American Ministries of the Synod of the Sun are especially glad to continue working with Rev. James Lee, who has provided leadership for the group.  The PW from the African American Ministries are especially glad to forge a closer relationship with Elder Danita Nelson, who is newest representative attending seminary.

As the PW of NCFA enters 2013, they along with the PW from Genesis will be hosting for the first time PW Fall Cluster meeting in Austin.  As a whole, the group will plan teams for the PW Mission Presbytery Women’s Spring Gathering at Mo-Ranch in April, the Women’s Conferences in May, the Synod of Sun PW Gathering in July and the Horizons Bible Study Conference in July.

Come join us in “DANCING WITH GOD”!! 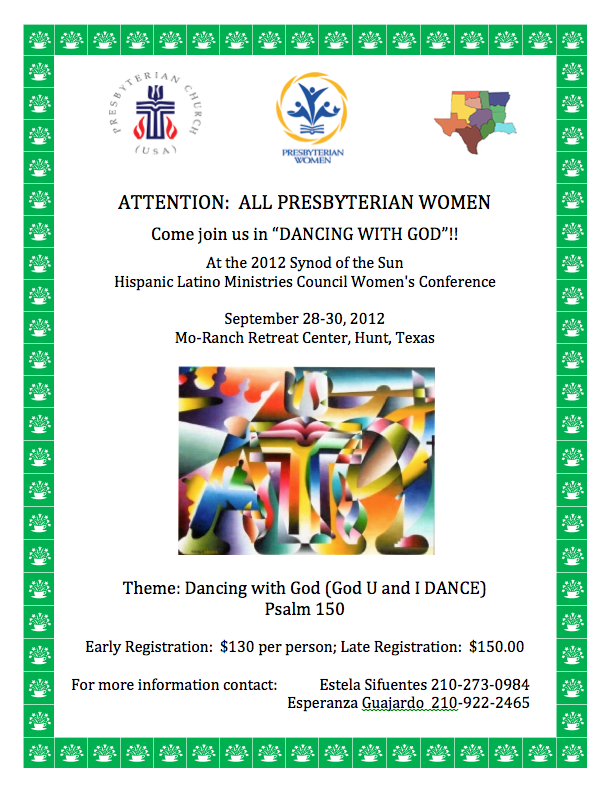 Register for the 2012 National Multicultural Conference

The facilitator was Frances Frazier, the text, Peaceful/Non-violent Manner, Facing Racism in a diverse Nation was used.

The goals of the committee were

A fictional documentary “Cosmic Slop, the Alien invasion” was aired.

The blatant racism was uncomfortable some of the members. The members of the committee had not experienced this nor do they live this way. The minority members have had enough positive experience, and understood the feelings of those members. It was a lesson for all and encouragement to work harder together.

There was further training for facilitators for dialog groups.

There are no upcoming events.